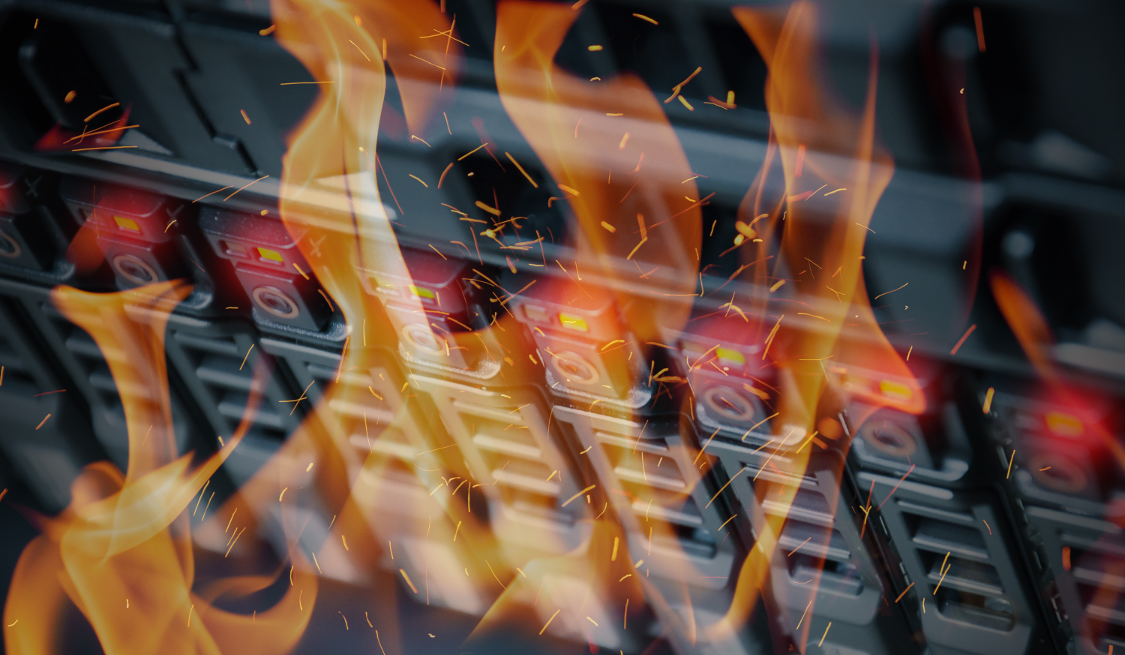 The August 2016 fire at the Delta Airlines data centre in Atlanta is reported to have cost the airline more than one hundred million dollars.

For a fire to start and grow we need three things, a fuel source, oxygen and an ignition source. Data centres have all three in abundance. The fuel source can be any electrical equipment, a build-up of packaging material, diesel oil storage and plastic insulated data and power cabling.

The oxygen comes from the vast amounts of air pumped around plenum spaces to take away the heat generated by the IT equipment. For example, a one-megawatt heat load in a computer room requires 74 cubic metres per second of air flowing through it to take the heat away and send it back to the air conditioning equipment. That’s about the same as the entire air volume of an average house, every two seconds. A cable fire in a plenum space, such as under the raised floor, will spread around the building within tens of seconds.

Cable requirements
In America, there have been long-standing rules about the flammability of cables in confined spaces that are generally referred to as UL riser and plenum cable requirements.

In Europe, the issue has been debated for decades with remarkably little legislation (basically none) concerning the flammability of cables within buildings. To cut several decades of argument short the debate has centred on whether cables should be incorporated in the Construction Product Regulations, or CPR. (REGULATION (EU) No 305/2011 OF THE EUROPEAN PARLIAMENT AND OF THE COUNCIL of 9 March 2011 laying down harmonised conditions for the marketing of construction products and repealing Council Directive 89/106/EEC).

The CPR replaces the earlier CPD (Construction Product Directive) and it is effectively a set of safety and environmental standards covering products intended for inclusion in the permanent installation of a building. One of the seven requirements for CPR rated products is safety in the event of fire. CPR products are CE marked to show their conformance to this Regulation.

Fire performance is generally rated from Class A to Class F. Class A means extremely fire resistant. Class F would be essentially an unclassified fire performance.

CE marking and a CPR fire rating for indoor communications cabling is finally here and was made compulsory from 1st July 2017. Unlike the simple American approach the CPR rating is neither simple nor does it mandate any government to enforce any minimum level of fire safety. Cables merely have to be marked to show which of the seven grades of flammability they meet and it is up to each EU government to decide which, if any, cable should be installed in their own country.

The grading, for flammability, goes from A, B1 and B2 and then from C to F. A is likely to be a specialist fire survival cable for fire signalling systems whereas F has no performance criteria at all. The reaction to fire criteria, which defines the letter of classification, covers heat release and flame spread, but there are three other parameters invoked as well; smoke production, flaming droplets, and acidity.

Smoke production tends to speak for itself and there are two sub-grades to this.

Flaming droplets measures how much a plastic would melt and distribute a fire with burning drops of molten plastic. There are three subgrades to this parameter.

Each country will be free to define its own fire requirements for cables
Acidity (and conductivity) is related to the particularly adverse effects of some smoke. PVC (polyvinyl chloride) sheathed cables in particular release chlorine when they burn (in the form of highly toxic hydrogen chloride) and the chlorine recombines with water molecules to form hydrochloric acid. This in itself is extremely corrosive but is also a good conductor. Hydrochloric acid condensing on electrical equipment will usually destroy it by short circuiting. For this reason, even modest PVC fires in a computer or telecommunications room can have a disproportionate destructive effect.

Chlorine is one of the elements known as halogens. More modern plastics made without chlorine tend to be known as non-halogenated, zero halogen, low smoke, zero halogen etc. The new CPR cable standard doesn’t specifically say ‘zero-halogen’ but it gives three levels of acid production from the combustion products, a1 to a3.

Country specifics
Each country will be free to define its own fire requirements for cables. So for example in the Netherlands Class D will be the minimum default where cables are installed in bundles and B2 & C will apply where buildings have a high population or evacuation is difficult.

In the UK it is anticipated that Class D and E will only be permissible for residential and standard commercial property. Class C will be required for fire escape routes. BS 6701:2017 requires Cca-s1b,d2,a2.

If we look at the UK, we have two relevant standards about to be published:

The new standard will state: “Telecommunications cables should be selected in accordance with BS 6701.”

The new standard will state: For new installations and the refurbishment or extension of existing installations within the external fire barrier of buildings and other structures, installation cables which are subject to the Construction Products Regulations shall, as a minimum, meet the requirements of EuroClass Cca-s1b,d2,a2, in accordance with BS EN 13501-6*.

So let’s deconstruct that new specification for the UK:

Cca About half way down the flammability scale A to F

s1b The second of the two smoke production requirements, s1a would be the highest

a2 The middle figure in the acidity production scale. a1 would be the best and a3 is ‘no performance declared’

So it’s a fairly middling and undemanding performance but it’s a lot better than nothing. Prior to this, any cable of unknown fire performance could be specified, and as you may have suspected, as the flammability goes up, the price goes down.

For a high-value project like a data centre, where data cabling is typically 5 – 9% of the build cost but where a cable fire incident tends to be catastrophic, you can always specify a better quality cable such as B2ca-s1a-d1-a1.

From now on make sure you specify and use correctly CE marked and CPR rated cable with a meaningful performance that meets at least the minimum requirements of your country.